No One Wants a Deer in the Headlights

Distance interviews have become relatively common in television news. Whether they’re done via satellite or Skype, what are sometimes called double-enders require a certain skill.

In most television/video interviews, you will look at the person asking the questions. Distance interviews are the only time you have to look directly into a camera. It can be awkward to look unwaveringly into a black lens. If you’re not used to it, I would recommend practicing before you commit to the real thing.

The trick with these types of interviews is to make them look as if you’re talking directly to the audience. You want to appear natural. Some people try so hard that they achieve the opposite. They stare. That’s a problem because no one wants a deer in the headlights.

Don’t look up, down or away.

Many of us tend to let our gaze stray when we’re thinking, but this is something you need to control. You will be seen in a head and shoulders framing so any little movement will seem exaggerated. Beyond that, if your gaze wanders, the audience will wonder who or what you’re looking at. If you look up, they may wonder if you’re reading cheat notes on the ceiling.

Even when the host is speaking and you’re being introduced or thanked, look into the camera. If another guest is speaking, look into the camera. You never know when the shot will be of you. Ask the technician who sets you up exactly where you should look. A little higher or lower could affect your eye level and whether or not it seems as though you’re speaking to the viewers at home.

All of the sound you hear will come through a device in your ear called an IFB. That’s short for interruptible fold back…a term that’s never really used. The IFB will be attached to a cord that’ll be clipped to the back of your collar. Anchors may have their ear pieces custom-made, but, as a guest, yours will be one size fits all. If it falls out, simply put it back in. People are aware of the technology.

Sometimes you’ll be given a knob to adjust the volume, but remember that the sound may vary or disappear altogether. If it disappears, mention it immediately then wait until they fix the problem. Don’t try to second guess the direction of the interview and assume the next question. It will be very strange if the audience has actually heard the question and you continue on with something completely off topic.

You might be offered a monitor so that you can see the person asking the questions. It’s tempting, but don’t accept. A monitor will only distract you. And, you’ll be looking toward the monitor instead of straight into the lens of the camera.

If you’re outside, try not to be distracted by your surroundings or anyone who might decide to steal your spotlight by jumping around you making peace signs and waving hi to their mom.

If you’re inside, realize that sometimes you may be alone. The camera person may set you up in a small, quiet room and then leave. Don’t panic, but also don’t fall asleep while you wait. That’s been known to happen. And, if you’re in a studio, realize that robotic cameras, on occasion, can do strange things. Ignore them and hope that one doesn’t go out of control and run you over (just kidding).

While the broadcast quality of these interviews is not good, they are quite common. Again, they are distance interviews and the most important thing is to maintain a steady gaze. Don’t let your eyes wander. People watching need to think you’re talking directly to them. If you have to sit in a swivel chair, glue yourself to the seat and don’t move.

Lighting and sound are important.

One of the biggest problems with Skype interviews is that they don’t seem professional. So before you do the interview, test different locations. You want to be in a space with proper lighting so you don’t look shadowy or too dark. Don’t have a window or other light source behind you. The light should come from the front. The internal microphone of your computer should provide acceptable sound, but always choose a spot that will be quiet where you won’t be interrupted.

Make sure your background isn’t messy or distracting. You might want to use a company logo or a tidy bookshelf. If you’re going to be doing these types of interviews regularly, consider a permanent Skype area with a proper background and good lighting so that set up is minimal and you’re always ready to take advantage of a media opportunity. 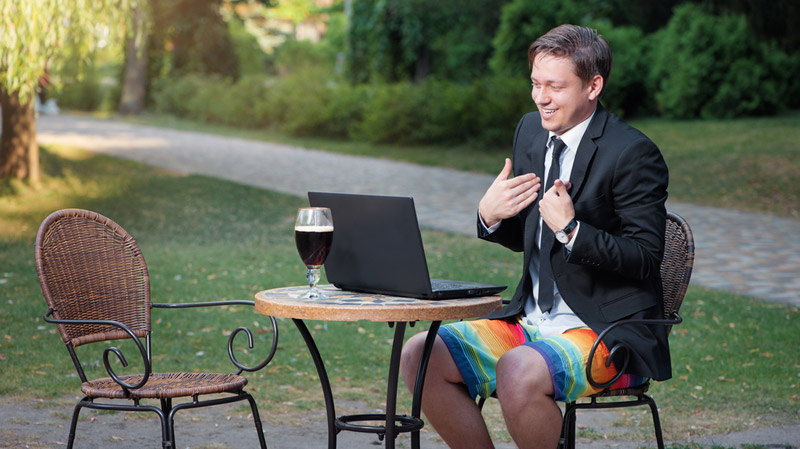 And, remember, wherever you choose to do your distance interviews, they are first and foremost media interviews so all the rules of media training apply.